Ativan is a benzodiazepine medication classified by the Drug Enforcement Administration as a Schedule IV substance. This indicates that it has a moderate potential for abuse and physical dependence in users.

When a drug has a potential for physical dependence, it will eventually produce withdrawal symptoms in chronic abusers and users when they try to stop or reduce taking it.

Physical Ativan dependence happens when an individual takes the drug for a long time. When you chronically and heavily abuse a drug, your system gets used to having it to function “properly.” Your body then automatically modifies the release of its own chemical substances like hormones and neurotransmitters to justify the presence of the drug in your system. So when you suddenly stop taking the medication, it throws your entire system off balance producing multiple physical symptoms called withdrawal symptoms.

Ativan withdrawal can be dangerous and potentially fatal due to the risk of developing seizures during detox. The timeline for Ativan detox typically happens in two phases: the acute stage and a prolonged withdrawal stage.

The overall timeline for Ativan detox, whether supervised or unsupervised, looks like this:

Regardless of this general timeline, some people may keep experiencing withdrawal symptoms for a few weeks after stopping Ativan use. In some instances, these symptoms might come and go at a varying intensity for a few weeks.

The user’s Ativan abuse pattern primarily affects the duration, intensity, and onset of withdrawal symptoms during detox. Other contributing factors include:

There is also the issue of abusing Ativan with other drugs such as sedatives, alcohol, or prescription opioids, which is common in most people abusing benzodiazepines. Individuals who use this medication with other substances for a long time will also have additional problems and a complicated withdrawal process.

This medication has an average short half-life of 10 to 12 hours, meaning the withdrawal symptoms can occur fairly quickly within 24 hours after the last dose. On average, Ativan withdrawal symptoms typically occur within 3 to 4 days after stopping one’s use. Acute withdrawal from this medication results in symptoms such as trouble sleeping, increased blood pressure, an elevated heart rate, and a rush of anxiety, also called a rebound effect.

This rebound effect happens when the symptoms that the drug was initially treating (which in this case is anxiety) come back when you stop using the medication. Other expected symptoms during this period include:

The acute withdrawal phase during Ativan detox usually lasts between 5 days and four weeks. Symptoms will peak within the second week and start becoming less intense. 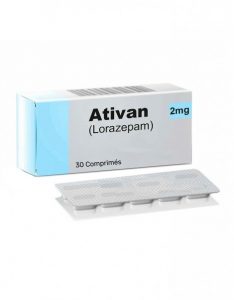 This withdrawal stage can last for 10 to 14 days, but this period can be significantly longer for heavy Ativan users. During this stage, the symptoms will become fewer and less intense. However, the user will still experience problems such as flu-like symptoms, headaches, stomach upsets, drug cravings, depression, and anxiety.

Some individuals will experience a return of intense anxiety after protracted withdrawal in some cases. There may also be problems with mood swings, apathy, decreased motivation, and other psychological issues persisting for months or even years after stopping Ativan. This can be referred to as post-acute withdrawal syndrome or PAWS.

The extended withdrawal symptoms might indicate the result of the neurological and physiological changes that happened in the user due to heavy and extended drug use. This could have also been worsened by pre-existing factors further exacerbated by stopping Ativan use.

The recommended benzodiazepine withdrawal method for Ativan is prescribing alternative long-acting benzo like Valium and administering it on a tapering plan. Your physician will typically start with a dosage that will best control withdrawal symptoms and then gradually reduce it between one or two weeks. This method allows the user’s system to get used to smaller dosages of the medication.

The end goal is to discontinue the drug altogether so the user can function normally without taking it. This process may lead to an extended recovery period, but it is more comfortable and safer for the person in treatment. Other drugs can also be used to ease withdrawal symptoms depending on the patient’s needs. These medicines may enable the person to manage their Ativan detox process, avoid potentially dangerous health problems, and start developing a long-term recovery program.