People have been taking alcohol for hundreds of years, and there have been different variations of it since. Alcohol is a hallucinatory drug and a chemical. Secondary alcohols, which are the types we use daily, are formed when alcohols combine with other atoms. They include ethanol, isopropanol, and methanol.

The kind we can safely drink is known as ethanol. The other two kinds are used for manufacturing and cleaning, not drinking. Methanol is used in the fuel for boats and cars and also in the manufacture of windshield wiper fluid, paint remover, and antifreeze. Isopropyl alcohol or Isopropanol is more commonly known as rubbing alcohol which is used for disinfection and cleaning. Isopropanol and methanol are both lethal to man because our bodies break them down into harmful substances that cause liver failure. If you take even the smallest amount of rubbing alcohol or methanol, it can be fatal.

What humans drink is known as ethyl alcohol or ethanol and it is produced when you ferment starches, sugars, or yeast. People have taken ethanol-based beverages like wine or beer for centuries to alter their moods. Nevertheless, ethanol also has deadly results on your body. The liver can break down ethanol but in restricted amounts, as it is toxic and can damage the brain, liver, and other body organs with time. It also depresses your central nervous system, diminishing your judgment and coordination. Furthermore, some forms of alcohol abuse, such as binge drinking can lead to alcohol addiction or alcoholism. 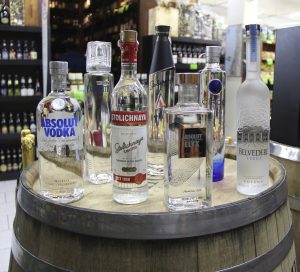 Alcoholic drinks are grouped into two categories: undistilled and distilled. Undistilled alcoholic drinks are fermented drinks made through the process of fermentation. Fermentation is the chemical process through which yeast or bacteria changes sugar into ethanol. Beer and wine fall into this category. Breweries ferment grains like wheat and barley to form beer, and wineries ferment different types of grapes to produce wine.

Distillation is usually done after fermentation, and it is the process of changing a fermented substance into another with a higher concentration of alcohol. Distilling an alcoholic drink concentrates it further by isolating the components of the fermented substance from the alcohol. Spirits and liquors fall into the distilled alcoholic beverages category, and they have more alcohol by volume (ABV) compared to fermented drinks. Distilled alcoholic drinks usually also have a higher alcohol proof.

Most alcoholic drinks usually have a low ABV of about eight to 25 percent and go as high as 40 percent maximum. It is rare to find alcohol with an ABV of above 40 percent, in most pubs or bars unless someone asks for a stronger drink to be brought in, maybe from another area of the world. Some countries usually set up restrictions for the highest ABV for alcoholic drinks sold in their regions. Although, for people suffering from alcohol abuse problems, it is not uncommon for them to partake in alcoholic drinks with an ABV of even 96%.

Distillers around the world usually strengthen the alcohol content of some whiskeys, absinthes, vodkas, and rums to produce more appealing and high-proof drinks. Some vodkas have an average ABV of 80 to 100 proof, but certain specialty liquors even have an ABV of 98 percent or 196 proof. For such high-proof alcohols, it is best to dilute or mix them with other beverages as they are not meant for sipping.

Various types of alcoholic drinks have a higher alcohol content than others, and those with higher ABVs can cause alcohol poisoning and drunkenness faster, even in small quantities.

Distilled alcohol is stronger than undistilled or fermented alcohol hence why they have such high alcohol by volume percentages. Distilled alcohol or spirits and liquors are produced when fermented substances go through distillation, which makes them more potent and stronger. Some distilled alcohol can go through several rounds of distillation to make them even stronger and purer by increasing their alcohol content. All hard liquor or spirits have a high alcohol content which ranges from 20 to 65 percent. Based on the average ABV ranges of distilled alcoholic drinks, vodka seems to be the strongest by comparison. It can have an alcohol concentration of as high as 95 percent, and you only need to take a small quantity to become drunk.

Regardless, any alcoholic drink can result in an alcohol use disorder, so it is important to know the alcohol content of what beverage you are taking every time you drink. This will help you pace yourself and prevent you from problem drinking or alcoholism.